When is enough, enough? I kept asking myself that same question everyday. Breast reconstruction is never a perfect process and I’ve spoken openly about my surgeries in the past (here and here) because I know I’m not alone. I had high hopes going into my last surgery but found myself feeling deflated the moment I removed the bandages and saw the indents and extra skin that still remained. A feeling that I know many can relate to. My surgeon told me to wait a few months for the implants to settle into place, but we both knew I would need another surgery to get my breasts to where I could feel like myself again.

My affected right breast had surprisingly caused me little to no complications throughout the reconstruction process. It was the perfect size and shape and only had a minor dip where the lat flap and breast tissue didn’t sit flush. But it was my left non-affected side that caused the most pain – both physically and emotionally. Every time I looked in the mirror, I saw the loose skin hanging from the bottom of my breast and the indents and valleys. Trying on bras felt like a demoralizing process. My left breast wouldn’t fit into bras that fit on the right and I would leave the store empty handed and deflated. I wanted nothing more than to fast forward a few months to get this next surgery done hoping this time would be the last.

I kept myself busy over the next few months exercising to strengthen my body again and travelling to both NYC for the AnaOno x Cancerland fashion show and Orlando for the annual YSC Summit (blog post to come later). It felt great to leave my worries behind and connect with other women who knew exactly what I was going through. But once I returned home and the reality set in that my surgery was coming up in just 5 days, a feeling of dread began to pit its way into my stomach. The thought of being put under again and, even more disconcerting, the thought of waking up and being unhappy with the results again. I wanted nothing more than for this to be all over.

As the day before surgery approached, I found myself going through the all too familiar motions: food prep, laundry, cleaning the house and packing my bag before I was holed up for another few weeks. The same feeling of sandpaper across my skin as I scrubbed every inch of my body the night and morning before surgery. The same green and blue hospital gowns and sterile smells. The flashbacks from every time I sat in this same room with my husband awaiting yet another surgery. From the lumpectomy after I was first diagnosed to the mastectomy I underwent after finding out my margins weren’t clear to the implant exchange to get rid of the rock hard expanders in my chest. We were both done.

When my name was called to go back into the surgical area, I found myself speaking first with the anesthesiologist to address any concerns with being put under. The one thing about going in for multiple surgeries is you get to know your body really well: how it responds to anesthetic, how it wakes up, what makes it angry. In past surgeries, I woke up in a state of panic, feeling restricted by the bandages and finding myself calling desperately to the nurse for an Ativan. Full disclosure here…I also suffer from mild claustrophobia so the thought of being restricted amplifies the panic attacks tenfold during times like these. I also get nauseous when I wake up so the anesthesiologist reassured me she would administer both some anti anxiety and anti nausea medication intravenously to avoid that happening.

My plastic surgeon then came in to discuss the procedure and began his extensive drawing on me once again. I would be undergoing fat grafting, a procedure that involves taking fat from one area of the body and grafting it onto another. Although I had a petite frame, he found the best option was to remove fat from my stomach which would then be used to fill in the gaps around my breasts. The loose skin around my left breast would also be removed, requiring a 3-inch incision along the lat flap scars on the underside and sternum side of my breast. As I got wheeled into the operating room and the IV started in my vein, I looked around and thought to myself I hope I never have to see this room again. 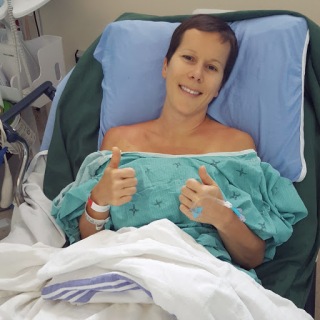 As the anesthetic wore off and my senses slowly awakened, I began to feel the pain and discomfort in my breasts where the surgeon had made his incisions. I couldn’t feel any pain in my stomach though and panicked for a second wondering if my plastic surgeon had in fact done the fat grafting. But the lack of feeling and numbness in that area quickly reassured me and I drifted off into sleep again.

After a couple of hours in recovery, I was finally feeling well enough to go home. My husband Josh came in with my chariot (wheelchair) but first helped me get changed out of my hospital attire and into my regular clothes. I had packed items that were easy to get on including this oversized Amoena Valetta camisole top with built in shelf bra which fit perfectly over my bandages as well as a pair of loose fitting yoga pants and flip flops. Once back at the car, I wrapped a blanket gently across my lap to protect my stomach from the seatbelt chaffing and a ParkPuff to cushion against my chest.

I had been sent home with antibiotics and medication to help take the edge off from the pain but I could feel it start to creep up again as it wore off. My left breast ached where the plastic surgeon had made his incision and the hot flashes were starting to flare up in my body again like clockwork. All I wanted to do was to nestle myself in bed but sleeping can be a bit tricky too. I always find myself worried about squishing my breasts and having the incisions open up. So, out came the pillow fort again, two pillows behind my back and one on either side of me to hold my arms up and provide a cushion against my breasts. 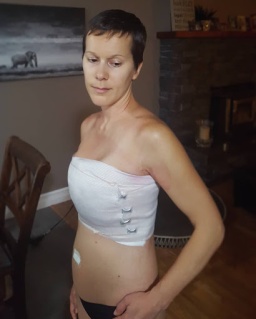 As I woke the next day, the pain in my breast felt like it had subsided but the nerves around where the fat was taken had clearly woken up. My stomach was extended and swollen and I felt pain and tenderness with every movement. The last thing I wanted to do was go in for my Zoladex injection but it had already been put off because of surgery so that the micro tablet didn’t get in the way of the fat grafting. I wondered though how I was going to handle a subcutaneous injection in my stomach when it hurt to even put on pants! But if I could make it through everything I’d been through thus far, then surely, I could get through this too. My gp oncologist froze the area with a topical spray and quickly gave me the injection so I could get back home and rest.

And rest I did. I watched more Netflix than I thought possible and stayed in bed for over 12 hours, waking only long enough to take my pills and crawl back under the covers again. Two days had passed since surgery and I knew that once I finally found the energy to get out of bed, it was time to face my fears and take off the bandages. I could feel myself holding my breath as I unraveled the bandages, the fear of disappointment and heartache setting in once again. But as the last of the bandages came off, I found myself letting out a huge sigh of relief. While my breasts were not perfect by any means, the extra skin was gone this time and the indents had been filled out. I finally said to myself what I had been waiting for for almost 2 years. I am done.

I’m now one week post op and continue to live in my yoga pants (while the swelling keeps going down in my abdomen) and my super cozy AnaOno compression bra (which I have to wear until I see my plastic surgeon in two weeks). My stomach still feels tender to touch and the bruising is starting to come out leaving me with a painted yellow hue but the pain meds have become less frequent. And I finally got out walking again which is a huge plus. But what has been most rewarding is finally coming to a place where I feel comfortable in my own skin again and accepting that I am perfectly imperfect.