What’s in a choice?

I’ve had a lot of people asking me recently about my surgery choices. Specifically, why I underwent a lumpectomy two years ago to then have to go in for a bilateral mastectomy one year later. I’ve written about it here and here but wanted to provide the fresh scoop as I approach my one year foobiversary. When I was first diagnosed, I spoke with my surgeon who recommended I get a lumpectomy in order to preserve my breasts and was a much less radical surgery. The tumour had been imaged through ultrasound and CT scans at 2.2cm so it wouldn’t make a noticeable difference aesthetically to remove it from my already larger sized chest. The research (1) also showed that a lumpectomy versus mastectomy had the same overall survival rates so it seemed like the right choice for me and was set up to go in for surgery the following week. 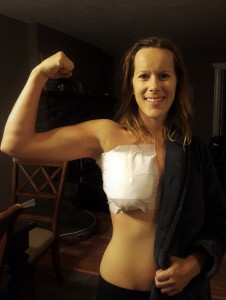 When I woke up from surgery though, my surgeon told me that the lump was much bigger than expected (4.5cm) and that some of the nodes looked suspicious. Instead of feeling relieved that the tumour was gone, I felt even more scared at its aggressiveness. How had this lump I just found already grown into the size of a ball in a matter of weeks and spread to my lymph nodes? After the pathology report confirmed the margins were clear, I began chemotherapy followed by radiation treatments straight afterwards when I got the news. My oncologist had another pathologist review my case and found that the margins weren’t in fact clear from my initial surgery. There were micro cancer cells satelliting around the primary tumor, small enough that the chemo and rads should’ve destroyed them, but the recommendation was made that I undergo a mastectomy to err on the side of caution.

To be honest, the thought of getting a prophylactic mastectomy had crossed my mind many times. I had so desperately wanted to find that peace of mind following surgery that the cancer was all gone but instead I was met with fear and uncertainty wondering whether it was going to come back. And the more I read up on invasive lobular carcinoma, the more I realized how much I was being swayed towards that decision. Invasive lobular carcinoma, which accounts for about 10% of breast cancers, is different from ductal in that it originates in the milk-producing lobules of the breast. But what was troubling was finding out that lobular cancer cells spread out more spider web like rather than present as one big mass making it difficult to get clear margins through breast conserving surgery and has a higher tendency to be multifocal (multiple tumors) and bilateral (occur in the other breast at the same or later time) (2,3).

Even though I leaned more towards that decision, it wasn’t until it was no longer a choice but a necessity that it became so much more real. To lose something that had been part of me my entire life was devastating. And while sometimes I look back and wonder whether I should have undergone a mastectomy from the get go, I don’t regret my decision. I wanted this thing out of me and felt like I made the best choice equipped with the information I had at that point in time. Everyone’s surgery is different based on hormone receptor status, type, stage, genetics, age, aggressiveness, etc. and ultimately is their own personal choice. There is no “one size fits all” approach to breast cancer surgeries. Whether you opt to have a lumpectomy, single/double mastectomy, implant, DIEP, TRAM, latissimus dorsi flap reconstruction or go flat, it’s about doing what is best for you and making an informed decision based on the information discussed with your doctors and through your own research.

It’s now been almost a year since I had my bilateral mastectomy with immediate latissimus dorsi flap reconstruction and while I miss my old boobs, I try to look for the silver lining like not having to wear a bra some days or worrying about things like nip slips or high beams. And try to laugh at the fact that I’ve shown my foobs off to more medical staff and people than I can count. But most importantly, I am celebrating this month being one year cancer free, NED, and kicking cancer’s butt!